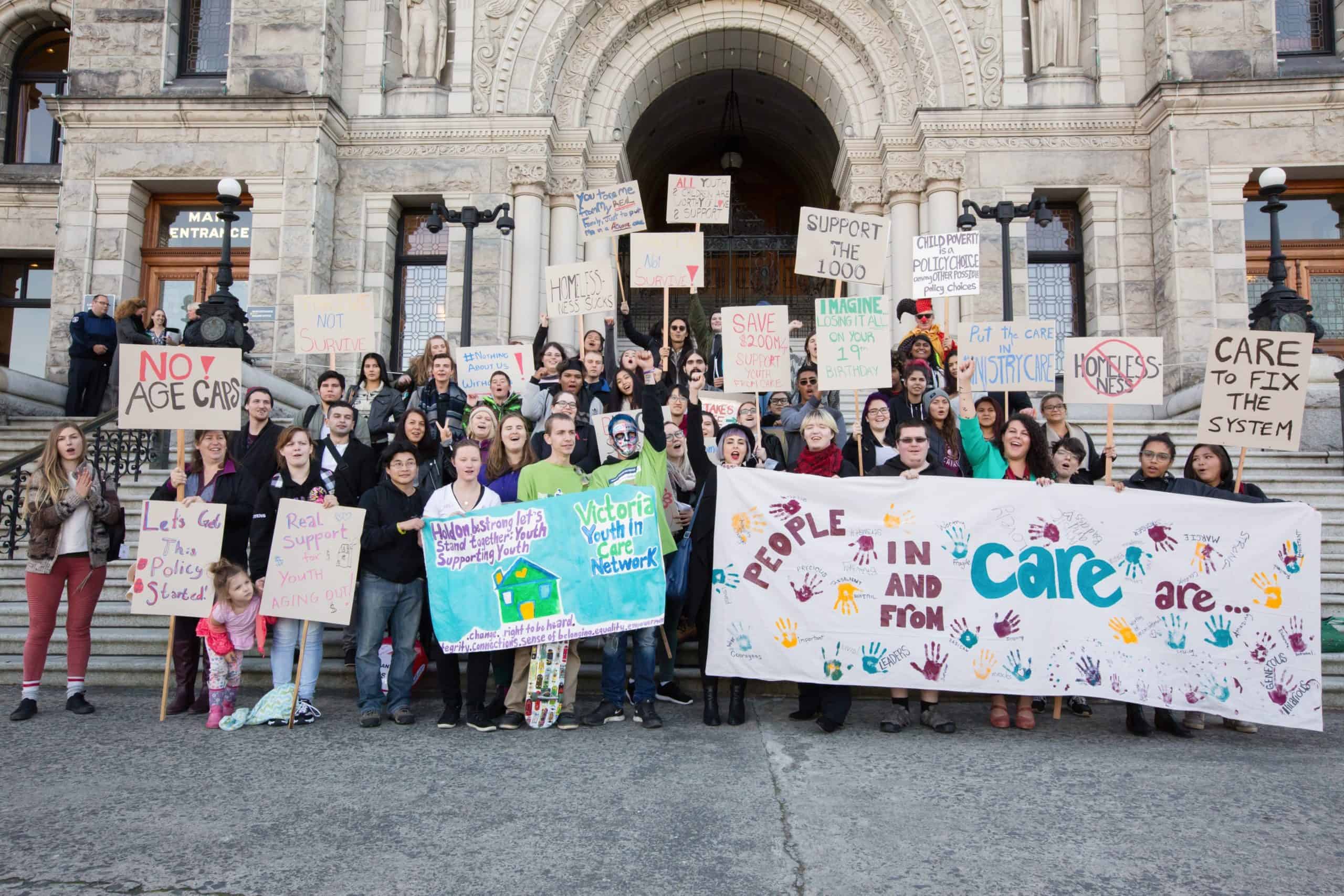 In 2017, youth gathered at the B.C. Legislature to advocate for the roughly 1000 youth that age out of care every year. Photo by Sarah Race.
Vancouver Island

Which B.C. party will best serve Indigenous kids in care?

In anticipation of the Oct. 24 provincial election, B.C. political parties are publishing platforms outlining how they intend to serve and support different communities. We asked folks involved in the child welfare system which party they think will best serve Indigenous kids in care — and which changes are most urgently needed.

Susan Russell-Csanyi is crystal clear about what she’d like to see from the new government — more support for youth aging out of government care.

There are currently over 5,800 children in government care in B.C., and according to a report by Fostering Change, each year, roughly 1000 kids age out of the system when they turn 19.

“What is available now is very much lacking in supporting youth from care,” says Russell-Csanyi. “We know the adverse outcomes that comes with a lack of support.”

Russell-Csanyi is an organizer with Fostering Change, a campaign that seeks to change public policy for youth “aging out” of government care in B.C. Fostering Change was launched in 2013 and is supported by the non-partisan organization First Call: B.C Child and Youth Coalition.

In a 2016 report, Fostering Change found that educational, economic, social, and wellness outcomes for many youth aging out of care are poor compared to most young people.

Russell-Csanyi wants to see changes to the Agreements with Young Adults (AYA) program, which helps cover the cost of living for youth who have lived in government care or who have been on a youth agreement. Youth are only eligible for the program if they are going to school, doing job training or attending rehabilitation, mental health, or a life skills program.

“Right now it’s something you have to sign up for, and it’s not available to all youth,” Russell-Csanyi says. “We believe that having an automatic enrolment system will reduce the number of youth that fall through the cracks.”

“A youth from care shouldn’t have to jump through hoops to get the supports that should be offered to them,” Russell-Csanyi says. “We don’t just want low-barrier, we want no barrier.”

In order to help youth who are eligible to vote to navigate the B.C. Election, Russell-Csanyi helped create a non-partisan Election Toolkit.

“The youth-friendly toolkit will help youth get engaged in the democratic process as well as lift up some stories of youth aging out of the system,” says Russell-Csanyi.

Carly Jones is a guardianship social worker with experience in Indigenous child welfare. She says that for the first time, she is really struggling with who to vote for.

“I’ve never missed a provincial election, a municipal election, or a federal election since I’ve been eligible to vote,” says the 29-year-old.

Jones, who identifies as Métis, has historically voted for the NDP, but says they can’t count on her vote in this election. One of the main reasons she says she won’t be voting NDP is because of their actions towards Indigenous peoples in B.C., namely during the Wet’suwet’en crisis.

In February, the RCMP were dispatched to enforce a court injunction granted by the B.C. Supreme Court on behalf of TC Energy’s (formerly TransCanada) Coastal GasLink pipeline. Hereditary Chiefs from the five clans of the Wet’suwet’en Nation unanimously rejected the court decisionand land defenders were forcibly removed from their own territory, prompting marches and rallies in B.C. and across Canada.

When asked how the Wet’suwet’en crisis impacts Indigenous children and families, Jones says that child welfare is not a singular issue.

“These are enshrined rights that [Premier Horgan] is trampling over, and that ultimately harms Indigenous youth, that harms families and contributes to us being disconnected from the land, which is harmful in many different ways.”

When Indigenous youth and supporters of Wet’suwet’en Hereditary Chiefs occupied the steps of the B.C. Legislature in February of 2020, Jones bore witness. She says she “felt unsafe” and “left out to dry” by Premier Horgan, whom she had publicly supported and voted for.

“The B.C. NDP really rallied Indigenous voters,” she says. “I feel like we really showed up for him [Premier Horgan] in 2017.”

As for the other party’s platforms, Carly says that from what she can see, they’re thin on details. “I think I can say with certainty that I won’t be voting in this election.”

Sophia Hansen is an Elder and Kwak̓wala language teacher with the Qwallayuw Head Start Preschool Program, which is offered through Laichwiltach Family Life Society in Campbell River.

She is also an Elder representative with the Kwakiutl District Council Executive.

Hansen says she is often asked to speak to young people and help provide guidance.

“I’m always up for helping the youth in any way I can,” says Hansen. “Our little ones need a good start and the right way to work out problems.”

Hansen doesn’t know yet who she is going to vote for, but she’s concerned about the overrepresentation of Indigenous kids in government care. Due to the ongoing impacts of colonization, systemic racism and intergenerational trauma, Indigenous children are grossly overrepresented in the system — accounting for two thirds of kids in care in B.C., despite representing just over 10 per cent of the total population, according to Statistics Canada.

“Officials, like family services, are so quick to take our children away from the parents, and put them into that system. Why do they think we need it more than non-Indigenous [people]?”

She’d like to see more support from provincial leadership for youth who are looking to further their education or find something they would excel in.

This support could come from Elders, Hansen points out. In her ideal future, there would be an Elders committee in each village who could be there for their youth.

“The Elders have gone through life lessons. The youth can ask questions about what they’re going through. Their goal is to help youth and help children to make it through life.”

How do I vote?