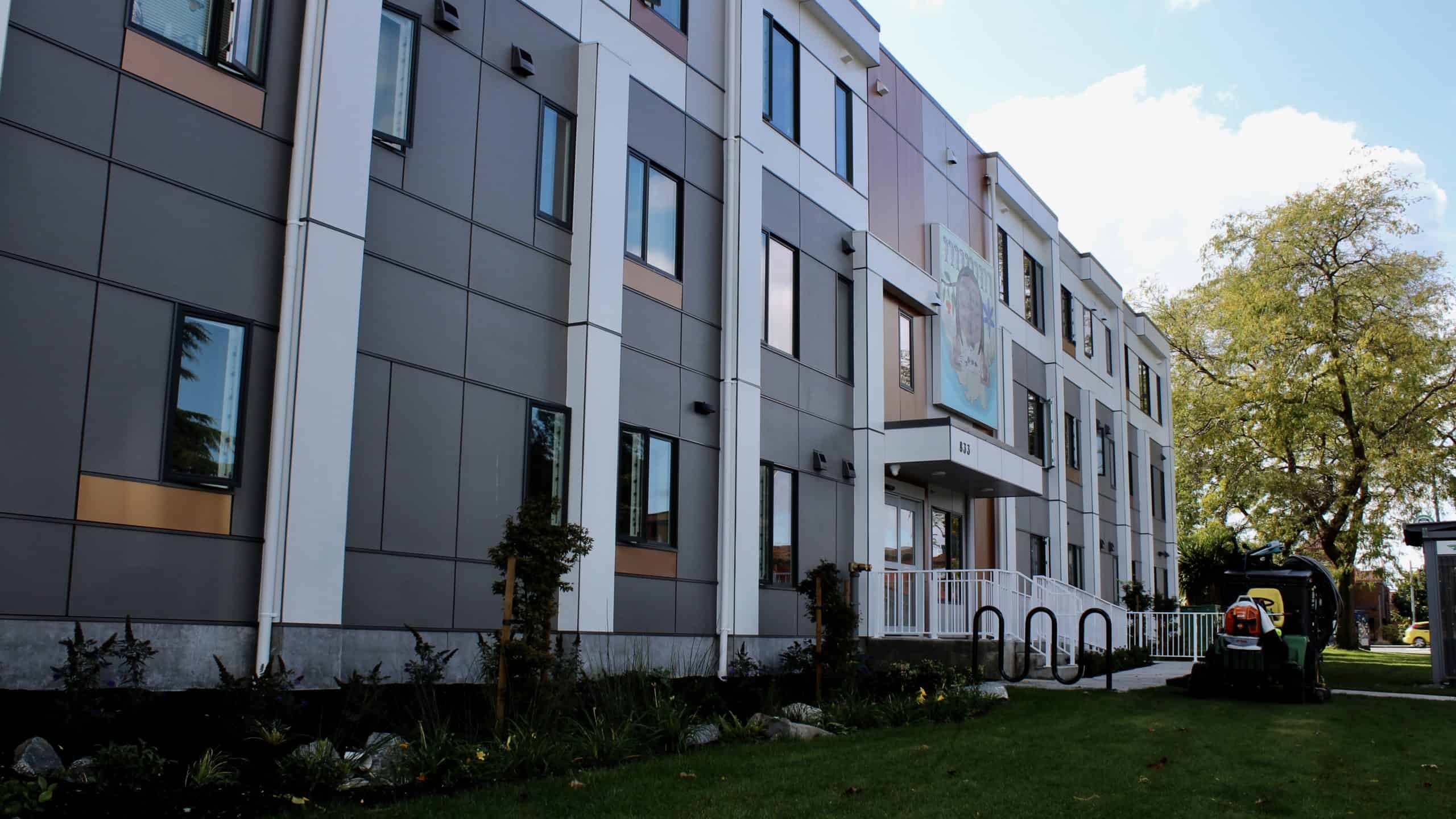 The Spa’Qun or Flower House is a modular housing project in Victoria that is operated by the Aboriginal Coalition to End Homelessness. Photo by Bayleigh Marelj
Vancouver Island

Three of the six new ‘ACT’ teams will be based on Vancouver Island
Bayleigh Marelj, Local Journalism Initiative Reporter
September 28, 2020
Support this work. Tell a friend.

On Sept. 20, the B.C. Ministry of Mental Health and Addictions announced six additional Assertive Community Treatment (ACT) teams in Victoria and five other communities, including the Cowichan Valley and Nanaimo.

One of the first things these teams do is help new clients find housing, Woodin says.

“One of the benefits of being involved with the [ACT] program is that they focus a lot on housing and helping people find and maintain housing.”

Woodin’s research has explored on the successes and challenges of ACT teams in Victoria, with a focus on police involvement.

“When you’re dealing with serious mental illness, housing stability really helps with stress management and feelings of safety in an environment where otherwise people might feel very distressed,” she says.

The mental health teams provide intervention and support for people experiencing severe mental illnesses and substance use disorders. Although they aren’t explicitly designated to assist Indigenous Peoples, in 2016, 10 per cent of Victoria’s approximately 322 ACT clients were Indigenous.

People with severe mental illnesses are more likely to be victimized by violence than they are to enact it, Woodin says. So helping them find housing helps keep them safe, she says. It also makes it easier for the teams to deliver services to the clients on a regular basis.

Adding extra teams in the province will “open more doors for individuals to get help they need,” she says.

The new Victoria team will be in addition to the city’s four existing ACT teams. Three are in the Pandora street area, and the other is based at Seven Oaks. Each team includes a combination of nurses, doctors, social workers, peer support workers and police officers.

In the press release announcing the teams, the province specified that ACT teams are “well suited” to deliver services to those living in supportive housing or tent city encampments. This means that Victoria’s unhoused population – of which 35 per cent are Indigenous – may benefit from the additional team.

Woodin says the teams “encourage both physical and mental well being.”

“They will make sure that people get access to health services as well, either from members of the team, or they will actually help them go to doctor’s appointments or remind them about appointments.”

In the press release Judy Darcy, Minister of Mental Health and Addictions, said the teams will help people whose difficulties have been exacerbated by the coronavirus pandemic.

“For many people, COVID-19 has made existing mental health struggles even worse,” reads Darcy’s statement. These six new ACT teams will deliver the care people need to get better and rebuild their lives as well as help stabilize and resolve the challenging situations that some communities have seen in the past few months.”

For Woodin, the provincial funding is a positive step, but she is concerned that the addition of a new team could put stress on the role of ACT team police officers in Victoria. Their positions are funded by the municipality.

These officers have the potential to be advocates for ACT team clients, in both the justice system and when they access healthcare. She says an important part of this role relies on “relationship building.”

In Victoria, when ACT clients are hospitalized, it is often the job of the police officers on the team to check them in and wait with them for assessment.

“The police are already spread pretty thin on the teams and so if they add a new ACT team, they really probably need to add a new police officer which is really complicated,” Woodin says.

In Woodin’s 2019 report on police involvement on ACT teams, it states that some social service workers criticized the program for including police officers. One felt that “the presence of police would always escalate matters when interacting with the homeless population.”

Although Woodin acknowledges this critique, she says that ACT officers are better equipped to respond to mental health calls than regular patrol officers.

“On an ACT team an officer would know a person for maybe six months. So then if that person goes into psychiatric distress, the officer knows who they are … and how to handle and de-escalate a situation to make sure they’re safe,” she says.