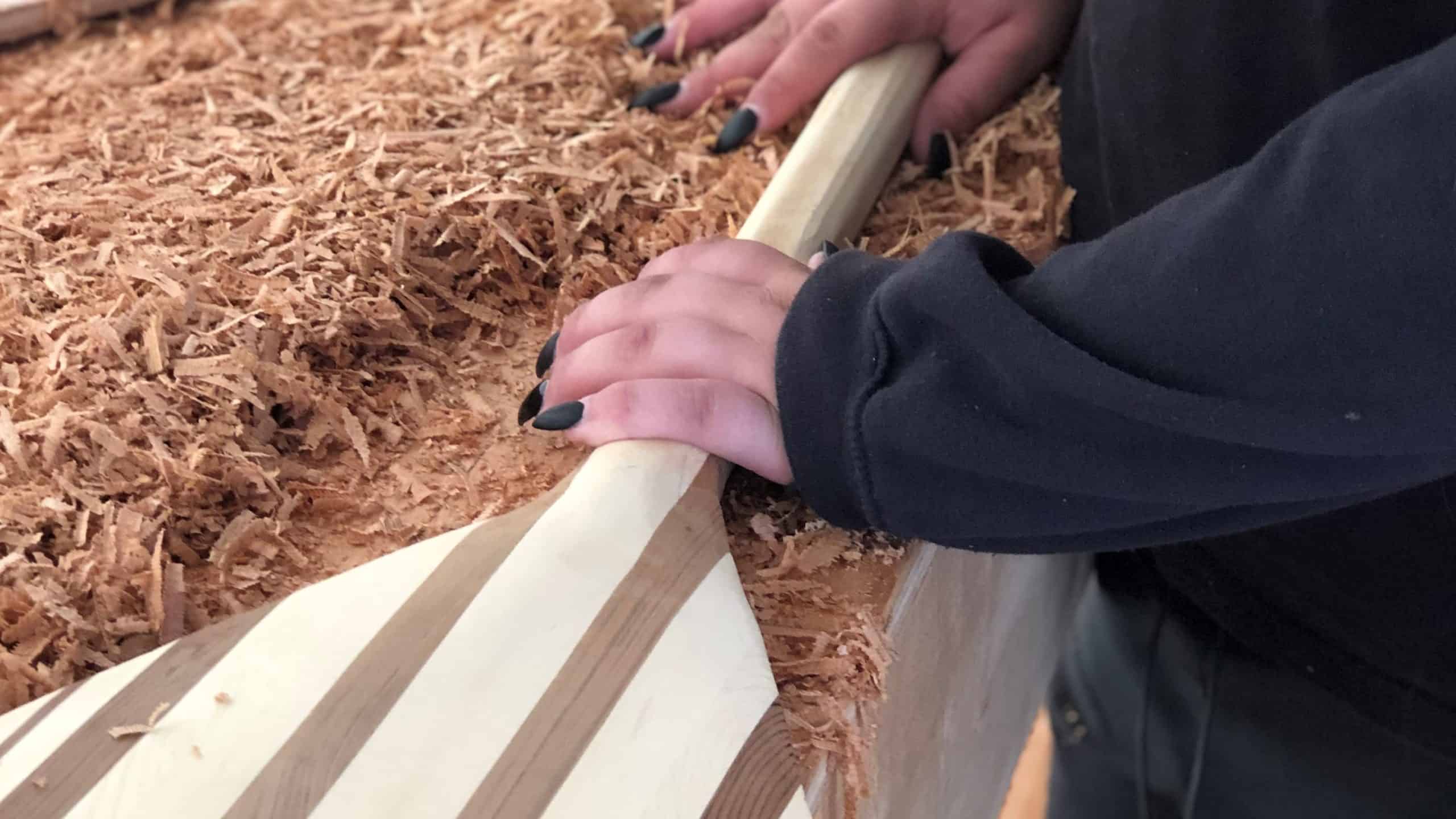 Autumn sharing a paddle she made at the Canoe Cultures worksite. Photo by Anna McKenzie
Vancouver Island

Perspectives on permanency in B.C. during COVID-19

What is permanency and how does it impact Indigenous children and youth in care living through the pandemic?
Anna McKenzie, Local Journalism Initiative Reporter
September 28, 2020
Support this work. Tell a friend.

In the heart of downtown Vancouver amongst tall buildings and a veil of forest fire smoke, Autumn — whose real name we’re withholding to protect her privacy — proudly shares two canoe paddles she made. Autumn is an Indigenous youth who is living in government care in Vancouver, although her family is Kwakwakaʼwakw from Alert Bay.

Throughout her time in the child-welfare system, Autumn says she thinks she has moved around eight times.

As she fast approaches her nineteenth birthday, Autumn is working to complete high school and to gain culturally-relevant work experience skills through the Concord Pacific Canoe Cultures program.

For Autumn, aging out is a daunting endeavour, particularly during a global pandemic.

The day after IndigiNews spoke with Autumn, the Ministry of Children and Family Development (MCFD) announced it will extend support to youth in care who are turning 19 until March 31.

In a press release, MCFD says “youth in government care will be able to stay where they are and those who have recently aged out of care will receive extra support”.

This may ease the transition for Autumn, and for many other youth in her position for the next six months, though it doesn’t change the impact that a lack of permanency has had on her life to date.

Autumn says there were pros and cons to being moved around.

“There are a lot of people that I consider as mother figures,” she says. “If you’re not doing too well with one mother figure, you can go to another.”

On the other hand, Autumn says being shuffled around led to “developed detachment disorders and different kinds of traumas.”

“I think that overall, I’ve always wanted to stay with one home,” she says.

When a young person in foster care is adopted or reunified with their family, they are said to have “achieved permanency” in the parlance of our child-welfare system. Permanency is sought by the MCFD because “permanent, stable relationships are a major determinant of whether children feel safe and secure.”

Autumn says that when children like her are bounced from home to home they are made to feel like “just a burden… just a paycheque passed on [from] person to person.”

There is a connection between the overrepresentation of Indigenous children and youth in care and past colonial policies and practices.

In an email, Jennifer Charlesworth, the Representative for Children and Youth (RCY), says “the severing of ties that a legal Western adoption model creates is particularly problematic, as is the ongoing disconnection to those families and communities”.

The RCY is an independent advocacy organization that directly reports to the BC Legislative Assembly on child welfare issues in B.C.

Once taken into government care, it takes longer for Indigenous children and youth to achieve permanency.

“Indigenous children in care are often then without permanency, on average, three years longer than their non-Indigenous counterparts,” according to a 2016 report on Indigenous child welfare in B.C. by Grand Chief Ed John.

There is also an underrepresentation of Indigenous adoptive families in B.C.

“Of the children and youth placed for adoption, the proportion placed in Indigenous adoptive homes has consistently decreased from 51 per cent in 2015-2016 to only 23 per cent in 2018-2019,” says the RCY.

“This is a concern as culture is a known protective factor for children and youth,” says Williams.

In recent years, perspectives on permanency have shifted to welcome other approaches of what it means to be ‘home’.

There are four dimensions of permanency that are being advocated for by the RCY. This includes relational, cultural, physical and legal.

Relational permanency means creating strong and lasting relationships with caregivers and adult figures, including biological family, foster parents, social workers, and teachers. Legal permanency, as it sounds, refers to who is legally responsible for the child or youth. Physical permanency is the creation of a safe living environment that is both healthy and lasting, and cultural permanency ensures the child is connected to their cultural identity.

The RCY says they are continuing to monitor the ways in which the MCFD are ensuring these dimensions of permanency are fulfilled.

In recent years, the RCY has made recommendations for a more robust and culturally attuned approach to permanency and has called on MCFD to understand that adoption is not necessarily in the best interest of every child.

Indigenous custom adoptions allows for Indigenous communities to collaboratively plan for the care of their children so they remain connected to their cultural identity.

Autumn says she wasn’t included in the process of creating her own care plan until she was older. Had she been more involved earlier on, she says she may have been able to advocate to be more connected to her cultural heritage.

She says the only connections to her culture were facilitated through Vancouver Aboriginal Child and Family Services Society (VACFSS), one of 24 Delegated Aboriginal Agencies in B.C., authorized by the provincial government to deliver child welfare services to Indigenous people.

“I think that this [access to culture] is a very flawed part of the system,” says Autumn. “I think that children who are under the care of VACFSS have a lot more opportunities because it is an Aboriginal based organization”.

Autumn says she would have thrived even more if she had been exposed to programs and activities that were more culturally appropriate to her identity as a Kwakwakaʼwakw person.

“I’ve been really lucky to have a strong influence in my life, which is my Uncle, and he is a very big name in the community,” says Autumn.

What’s next for Autumn?

Through the Canoe Cultures Program, she’s learning how to use her hands through the process of crafting a traditional canoe and paddles.

Looking back on the time she’s spent in the child-welfare system, Autumn focuses on the positive in her experiences.

“I try to live life without regrets,” she says. “I just think what I’ve been through makes me who I am today and so if I hadn’t been in so many placements, I wouldn’t be so adaptable.”

Editor’s note, Sept. 29, 2020: A previous version of this story attributed a quote from the Representative for Children and Youth (RCY), Jennifer Charlesworth to RCY staff member Jennifer Williams.