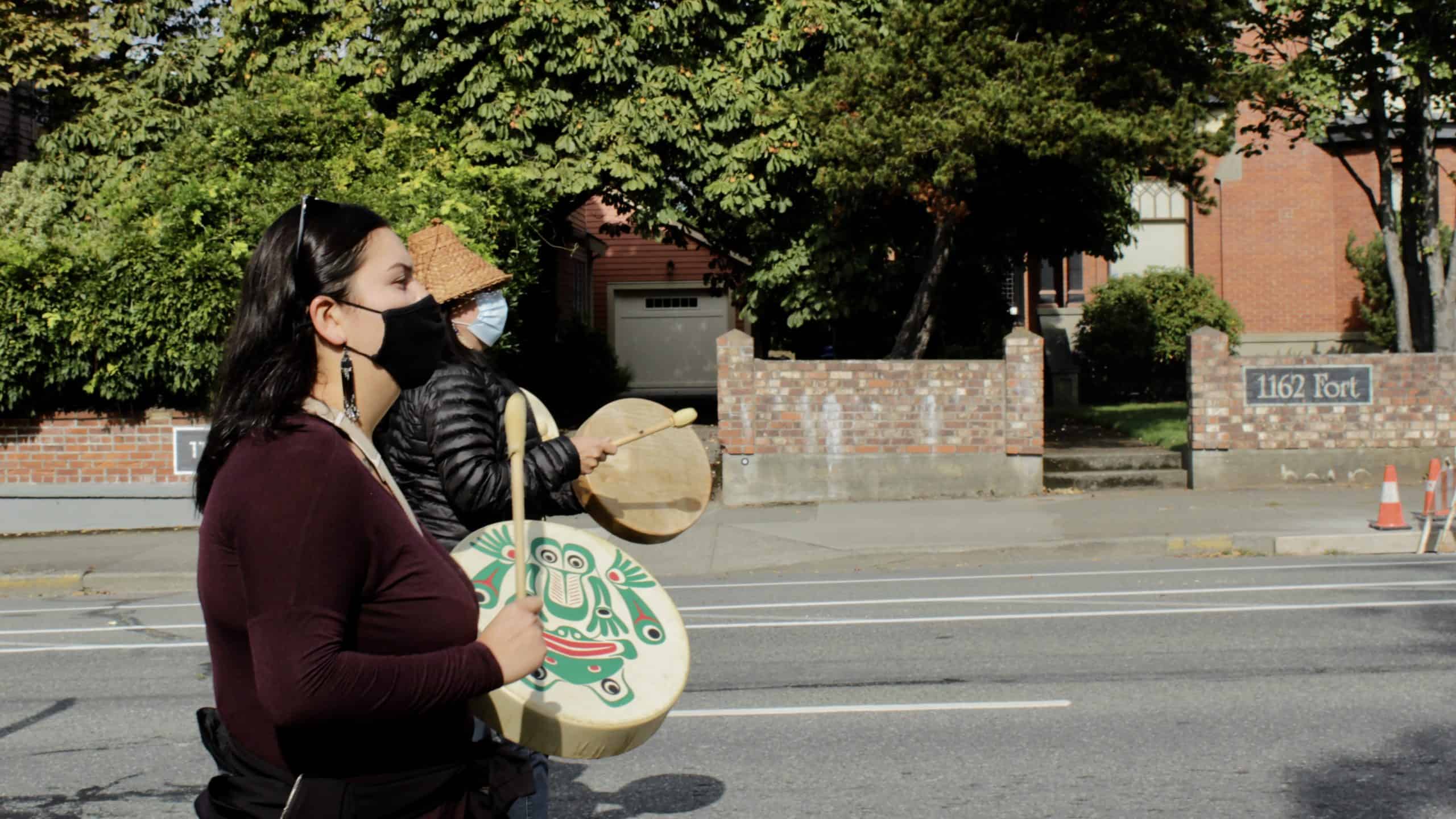 On Oct. 4, community members in Victoria marched from Our Place on Pandora Avenue to Royal Jubilee Hospital to memorialize and demand justice for Joyce Echaquan.

Echaquan, an Atikamekw woman and mother of seven live-streamed her final moments before she died at the Centre Hospitalier de Lanaudiere in Joliette, QC on Sept. 28. As she called for help, the staff taunted her with racist remarks.

“This story that we heard with Joyce is nothing new,” says Steve Sxwithul’txw, the master of ceremonies at Sunday’s vigil. “If we don’t say anything, if we don’t act, and don’t come together to talk about the events that lead up to her death, then we’d be doing ourselves a disservice.”

A member of the Penelakut Tribe, he says he hopes that one day there will be a governance board that can give policy and legislative advice to protect Indigenous people who access healthcare.

“This is one tragic example of systemic racism in the health system,” says Sxwithul’txw. “This has gone on for much too long.”

On Sunday, more than 60 people participated in the walk and vigil.

Speakers offered condolences to Echaquan’s family, called for systemic change and shared their own experiences of racism in healthcare.

The group arrived near the hospital’s emergency room entrance at 2 p.m. to hear songs of remembrance and prayer from the Lək̓ʷəŋən Traditional Dancers.

Allegations of racism in Canadian healthcare are not new.

In June, B.C.’s Minister of Health, Adrian Dix appointed Mary Ellen Turpel-Lafond to lead an independent investigation into allegations of racism in the province’s healthcare system. This came after allegations that health-care staff in emergency rooms were playing a “game” to guess the blood-alcohol level of Indigenous patients.

“As Indigenous people every time we step into the health system, the hospital system, we’re at risk, and it shouldn’t be this way,” says Sxwithul’txw.

Tania Dick, a registered nurse and member of the First Nations Health Council, took the mic and said that she wanted to speak and be present for Echaquan. This was so she could look down upon the crowd and know that “a nurse in this world believes that she was worthy, that she was important, that she was loved.”

Dick, a member of the Dzawada’enuxw First Nation, spoke about the inquiry into racism in the B.C. healthcare system. She says that Indigenous people have known for generations about discrimination.

She said that “leadership, bravery and courage” are needed to implement culturally competent health policies.

The Quebec Premier, Francois Legault did not say that Echaquan’s death was caused by a systemic issue. He and his government continue to deny that systemic racism exists in Quebec, despite the demands of Indigenous leaders.

The Assembly of First Nations Quebec-Labrador have drafted their own action plan to fight discrimination in response.

Christina Chakanyuka, a Métis woman, and assistant professor of nursing at the University of Victoria, said Echaquan’s death was not an outlier. She called Echaquan’s actions “another very public last attempt at resistance.”

“The systems that are presently here in the hospital institution… they’re based on old colonial policies,” says Chakanyuka. “It’s not a few bad apples, as people would like to say, that’s an excuse.”

Echaquan’s spouse, Carol Dubé stated in a press conference that he believes that his wife died due to systemic racism in the Joliette hospital.

During the same press conference the family’s lawyers stated they would be taking legal action against the hospital and its employees, including a lawsuit, a criminal complaint and a complaint with the Quebec Human Rights Commission.

Two hospital staff have been fired since the incident.

Editor’s note, Oct. 29, 2020: This article has been updated to correct the spelling of Christina Chakanyuka’s last name.