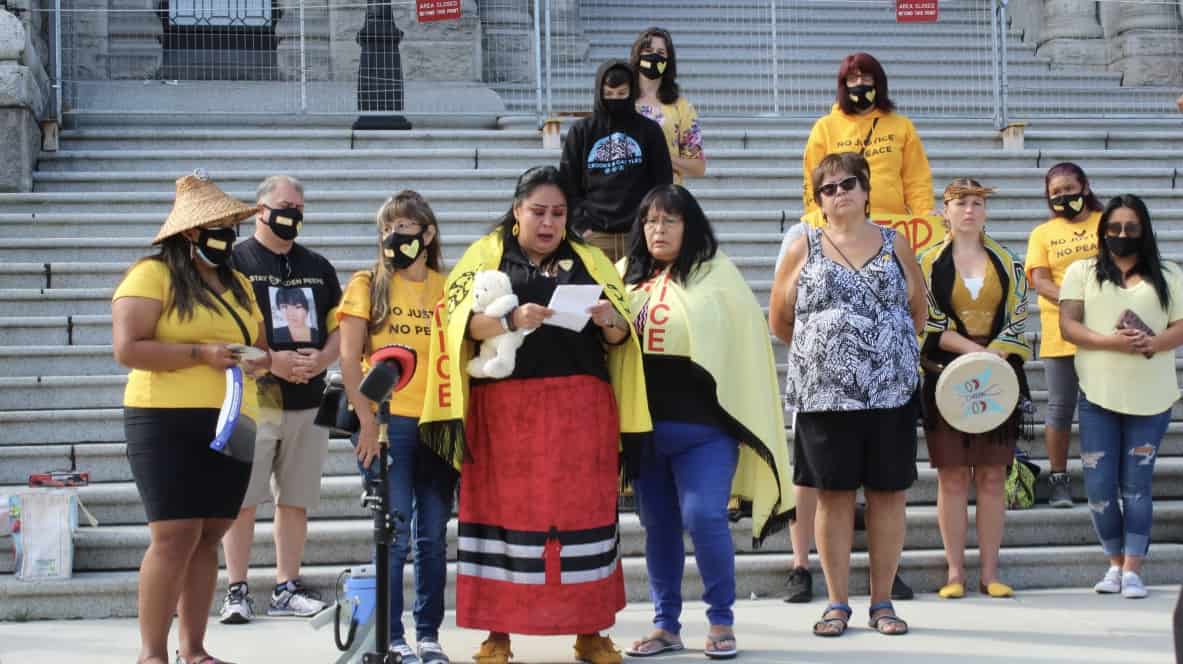 Martha Martin, Chantel Moore’s mother, speaks to a crowd of over 100 at the B.C. legislature on Sept. 5. Photo by Bayleigh Marelj.
Vancouver Island

Chantel Moore’s family and supporters continue to call for justice

The group returned to the B.C. legislature on Sept. 5 to call for changes to wellness checks and Indigenous oversight in the inquest on her killing.
Bayleigh Marelj, Local Journalism Initiative Reporter
Support this work. Tell a friend.

It has been over three months since Chantel Moore was killed by police in Edmundston, N.B. during a wellness check. Her family and their supporters have not stopped demanding justice and for changes to this police protocol.

On Sept. 5, Moore’s family and supporters stood on the steps of the B.C. legislature for the second time since her death. They called again for changes to wellness checks and Indigenous oversight in the inquest into her killing.

“We are here standing as one, to be a strong voice to let our country know that we will not sit idle. We will not sit idle no more,” said Moore’s mother Marth Martin. “I should not have to beg for justice for my daughter. Our children’s lives matter. My daughter was not just a status card number.”

Moore was a member of the Tla-o-qui-aht First Nation. Her death is currently being investigated by the Bureau des enquêtes indépendantes (BEIQ), the Quebec-based police watchdog.

Judith Sayers, the president of the Nuu-chah-nulth Tribal Council, of which Tla-o-qui-aht is a member nation, was asked to be Martin’s spokesperson at the rally when she grew overwhelmed with emotion.

“You know, the irony of all of this is the day that Chantel died…was the one-year anniversary of [the Final Report on Missing and Murdered Indigenous Women],” said Sayers. “Something that was supposed to help change things in this country has not been implemented in any great degree.”

The Final Report of the National Inquiry into Missing and Murdered Indigenous Women and Girls states that “the ongoing mistrust, due to negative experiences with law enforcement, continues to foster an environment in which many participants noted, people feel unsafe even asking the police for help.”

Changes to wellness checks and policing

Sayers said that finding justice in this situation means changing the way wellness checks are conducted.

In an interview with the Times Colonist, Martin stated that Moore’s Toronto-based boyfriend had called the police to perform a wellness check because he was worried that she was being harassed.

According to Victoria Chief of Police Del Manak, who was present at the rally, wellness checks happen when a police officer is called and sent to check on someone because there is a concern for their wellbeing. He stated in an interview that people who make these calls do so “for a multitude of reasons,” and that they are often related to mental health.

“The things we are looking for are justice for Chantel, and that they revamp wellness checks,” said Sayers. “That it’s not police who go in first, that it’s trauma-informed councillors.”

The Final Report also recommends that mental health services be integrated within other sectors, including the criminal justice system, housing and child and family welfare services. It states that “in trauma-informed services, safety is created in every interaction,” and that “incorporating knowledge of trauma into all policies, procedures, and practices of solutions and services is crucial to the implementation of the Calls for Justice.”

Indigenous oversight and calls to justice

Jeremy Son, the police officer who committed the fatal shooting, was originally placed on paid leave but is now back working on administrative duties.

Moore’s family has lodged two complaints with the New Brunswick Police Commission concerning Edmundston Police Force officers. One calls for the dismissal of Son. The other is a complaint against an officer who laughed when speaking to CTV News on June 5 in a video interview about the shooting.

The Tla-o-qui-aht hereditary leadership released a statement on June 20 demanding that Son be charged with murder under the Canadian Criminal Code. They expressed that to them Moore’s death “appears to be senseless, avoidable and an act of systemic racism.”

Moore’s family also expressed concern about whether the BEIQ will recommend charges against the officer that killed Moore due to its track record. Out of the 125 independent investigations into incidents involving a person being injured or killed by police that the agency has closed, zero charges have been laid against police.

At the rally, Sayers also stated that she wants Indigenous Peoples to be a part of the complaints procedure.

“That way there is understanding of Indigenous ways, Indigenous knowing,” she said. “We need an Indigenous oversight body for all policing across Canada.”

NDP MPs Gord Johns of Courtenay–Alberni and Laurel Collins of Victoria were also in attendance at the rally.

Johns’ riding overlaps the territories of the Nuu-chah-nulth. Sayers said he has been in support of Moore’s family “from the very beginning.”

“We need to make sure the public and especially Indigenous people trust an oversight process for the police,” said Collins in an interview. “We also need to make sure that we are changing the way that policing is done and the way that wellness checks are done. … All of these things are part of the systemic racism in so much of the world that we’re in.” 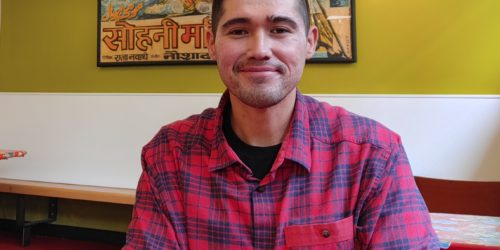 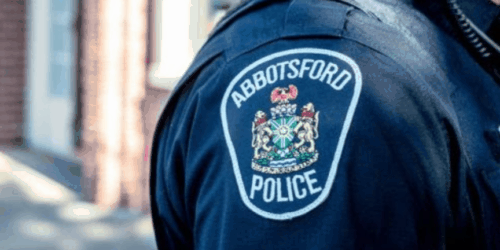