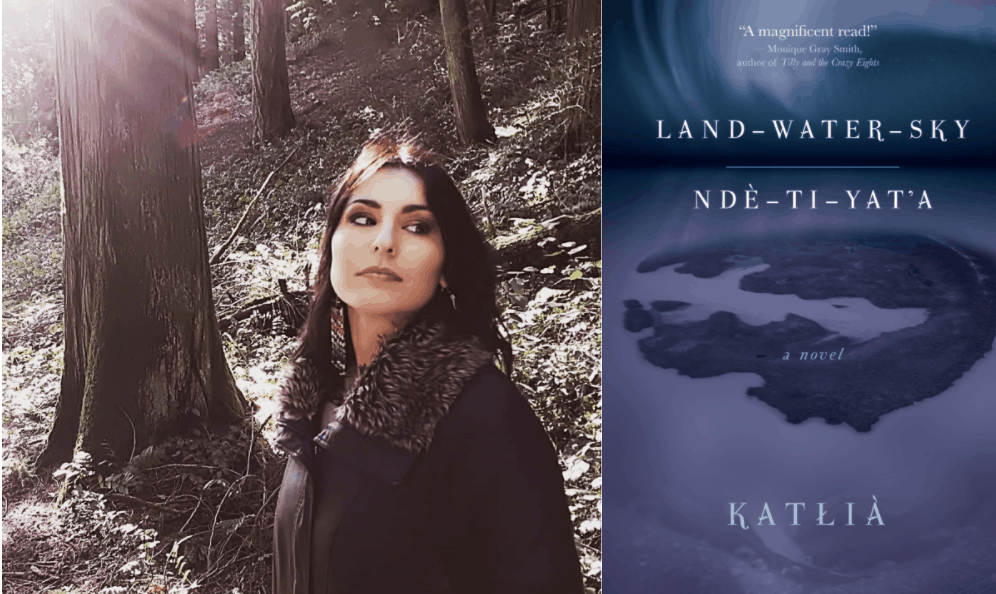 Dene author Katłįà (Catherine Lafferty) — who is also a reporter for IndigiNews — is releasing her debut novel Land-Water-Sky/Ndè-Tı-Yat’a today.

“It is well overdue,” she says, explaining that the book was originally supposed to come out in the spring but got pushed back. “I just want it to get out into the world — it’s like a baby, I just want it out!”

Having previously written a memoir called Northern Wildflower, which was released in 2018, Katłįà was inspired to write her new novel after an eventful summer trip to her grandmother’s birthplace.

Land-Water-Sky/Ndè-Tı-Yat’a layers the lives of various characters in a far-north community. Individual stories overlap — from a haunting tale about a mysterious presence in the forest, to a story about a secret at an archaeological site — but are all connected through a Dene worldview.

When she isn’t busy writing novels, Katłįà works for us at IndigiNews as an education reporter. She is also currently attending law school at the University of Victoria.

I sat down with Katłįà to chat with her about the book, our conversation has been edited for length and clarity.

Cara McKenna: You have a lot going on right now with the book coming out, and your work as a journalist as well as a student. How are you doing?

K: I’m so used to the hustle having been a single mom to my two children who are now teenagers. I want to leave a legacy for them and in order to do that I have to work really hard. Thankfully one of my strengths is multi-tasking.

CM: I heard that the idea for Land-Water-Sky was based around a short story that you had written. Can you talk a bit about that and how the story expanded?

K: It was a short story that I was writing for a CBC writing contest. It was non-fiction, and it was just about this summer that I had on the island that my grandma was born on in the north. There were just some really uncanny things that happened and I had to write about it.

And then I just sat on it for a while. It didn’t really get picked up with the contest, so I just thought what should I do with myself now? Because Northern Wildflower was out in the world, and I didn’t know what else to do with my writing. I thought I only knew how to write non-fiction. I didn’t ever really try to write fiction. And then I asked (Dene author) Richard Van Camp, who is one of my mentors, ‘what do I do?’ and he said ‘just keep on writing.” So I said, OK, I guess I’ll take this story and see what I can do. And it just sort of grew from there.

Every time I wrote there were more characters that were coming forward, and it just kept unravelling. It took about six weeks to write the whole thing, and I think only I could make sense of it. But Beverley Rach (of Fernwood Publishing), the woman who accepted Northern Wildflower, was like ‘yeah, we’ll take it.’ She partnered with me with an editor to help structure it and to get it where it’s at.

CM: I was hoping you could elaborate on what the process of writing a fiction novel was like for you, in comparison to writing Northern Wildflower, which was a memoir.

K: It was definitely not easy. Writing fiction is so much trickier than writing non-fiction. You have to be very imaginative but also at the same time, with a lot of the stories, there is some truth to them. I’ve taken little pieces of my life and [included them], so some of the characters’ experiences are actually experiences I’ve been through. Like the character Deèyeh. And the character Lafı — she had an abusive partner, for instance. So things that I couldn’t really write in Northern Wildflower that I wanted to, I wrote in Land-Water-Sky. Because I was able to remove myself from it.

CM: It also seems like Land-Water-Sky is very rooted in Dene culture and stories and worldview. What was that like, getting that out on a page and weaving it into a fiction piece?

K: I was really kind of scared, actually, about doing that. Because I knew that I could get in trouble if I didn’t do it properly, and could get a lot of not-great feedback from my community. So I reached out to people like Jordan Wheeler (writer for North of 60) and (Anishinaabe writer) Leeanne Simpson. And just asked for their feedback.

I was also just concerned about some of the stories that I was taking inspiration from, because I didn’t know if that was even allowed because of intellectual knowledge and property and things like that. I also talked to people like Val Napoleon and John Borrows who are my professors (at UVic law school) and asked them if it was OK, and they were like ‘yeah, as long as you’re not copying you can take inspiration from those stories.’

CM: Yeah, that’s so interesting — I don’t think a lot of people realize all the protocol involved in order to get these stories out and utilize them in a contemporary way.

K: I think it holds a lot of new storytellers back, actually. That fear of, ‘I’m going to get backlash from my community if I write this or that.’ There is a little bit of that fear that might hold people back from feeling like they can write what they want, and — not twist around a legend — but almost do some kind of fan fiction. That’s what I was thinking. Like, I really appreciate these stories. Why can’t we be writing about them more in modern-day contexts? We should be able to see these stories now.

CM: You’re publishing Land-Water-Sky using your Dene name Katłiįà, rather than with Northern Wildflower where you used Catherine Lafferty.

K: Yeah, it’s just a choice I made. I feel like I want to be able to assert my Dene name and that’s the way I’m able to do that. You don’t see too many one-named authors, either. I thought it was kind of cool. And I just like the way it looks on paper, I like the syllabics of it. And that name, I was called that by my grandma growing up. It means Catherine, so it’s not far from my other name. I think with fiction, I will continue to publish with Katłįà. With non-fiction, I’ll probably continue to publish with my legal name.

CM: What do you hope people will take away from this book?

K: Relativity. I just want them to see themselves in some of the characters. To see some of the themes. And just breaking down stereotypes. For instance, there’s a senior archeologist named Hank on the island, who is a white settler, and he’s an alcoholic. And so many people like him believe that Indigenous people are drunks. And so just doing that role reversal. There are a lot of subtleties that I hope people will pick up on and take away.

I also wrote it mostly for my people back home. I want them to identify with the references. I don’t expect southern Canadians who don’t have any knowledge about Indigenous traditions to truly understand what I’m writing about … but I know the people back home will. So that makes me happy knowing that they will pick it up. And if other people like it, that’s cool too.

I also really want young people to read it. I feel like young people aren’t reading anymore. And I made it pretty fast-paced. I think that’s just my writing style anyways. But I’m hoping it will hold the reader’s attention. That’s always the goal.

CM: What’s next for you? Because I heard you might be expanding this book into more books!

K: If I get the chance. I mean, I don’t have an agent, and I don’t have any promise of another book. But it would be awesome. I left it really open-ended so there could be more. What I really want to do is have a book for each character. Each character comes in at a different time in their life and so you don’t get a full picture of that character. That’s probably what I would do and I would probably start with the Elder. It would be really fun to have it as a (TV) series … it would be perfect for that because it’s in six parts. So I’m trying to pitch it to a few different places and see what happens.

CM: Is there anything else you’d like to say about the book, that I didn’t ask about?

K: I just want it to be received well, and just appreciate any feedback. If anyone ever wants to talk about their journey in writing, I’m happy to help guide people because I know how hard it is to break into the publishing industry. Especially as an Indigenous author.

So if I can support, I will, because it makes such a big difference to have that support. I have some really great people who have had my back. And I think the Indigenous writing world needs to move together and help each other. I really think that it’s so important to support each other as much as possible.